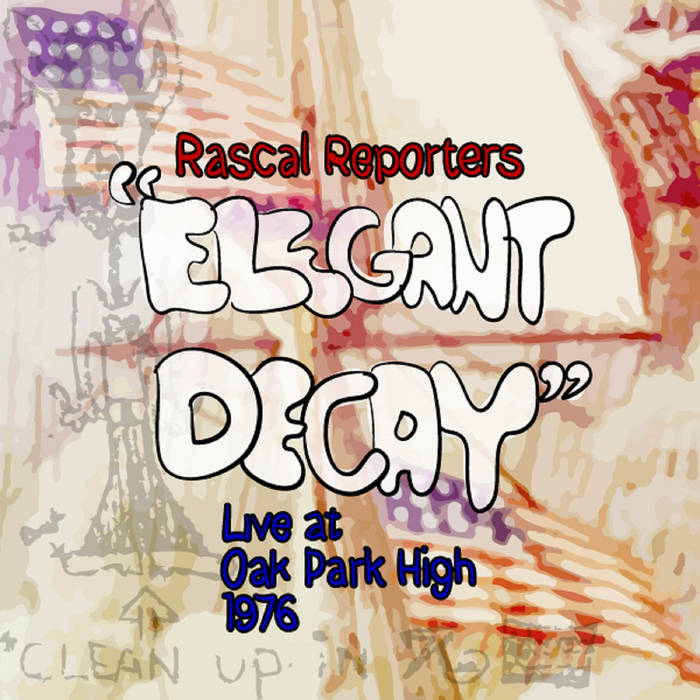 "We were all a few weeks away from graduating high school, and this concert evokes very fond memories (for the band, NOT the audience)," wrote Steve Gore in 1997. Strictly speaking, this was not even a Rascal Reporters concert; that name arrived a few years later, after the group lost its bassist and its principal composers (the two Steves, Kretzmer and Gore) moved off to different colleges. Instead, this young Detroit-area trio had been operating under the name Pigling Bland (a nod to one of their biggest influences, Soft Machine). The group performed at several school events in 1975 and 1976 and made piles of demo recordings in the Gore family basement (one of which is included as a bonus track on this release).

This particular occasion, April 14, 1976, was billed as an "Exercise In Elegant Decay" (a phrase borrowed from an article on Henry Cow) and was deftly recorded by Paul Kretzmer (future member of the band, future ex-member of the band, frequent collaborator, and brother to Steve Kretzmer) with only two microphones and an Akai 4000 series reel-to-reel machine. Six original compositions and zero cover songs were performed at this concert, a remarkable feat considering the complexity of the music and the relative inexperience of the musicians! The band performed two identical sets that day; both were recorded, and we've selected the best takes for this archival release. With the two Steves comfortably swapping instruments during the shows and Rick providing agile support on bass, this music must've confounded the kids in attendance - a crowd of 50 or so fellow students more attuned to "Detroit Rock City" than "Germ Patrol." "People were actually clapping after the songs, which surprised me," laughed Steve Kretzmer in a 2011 interview. "We were always a bundle of nerves, playing live."

Within a few months, Pigling Bland would be no more; the trio went their separate ways after high school (although, in 1978, the Steves did manage to record a silly tribute to their friend and former bassist, a song called "Ricky And His Dad"). In college, the Rascal Reporters' new sound soon emerged on demo reels recorded by Gore at Central Michigan University and by Kretzmer when on break from Grand Valley State (several of these recordings appear on the Rascal Reporters' 2015 rarities compilation, 'Nice Not To Be Here'). The duo eventually made their public debut with a cassette release, 'Freaks Obscure,' in 1980. The Gore/Kretzmer team would go on to issue six more full-length albums before Steve Gore's death in 2009.

Please join us in celebrating the legacy of Pigling Bland, a.k.a. the Rascal Reporters, by enjoying this Exercise In Elegant Decay!