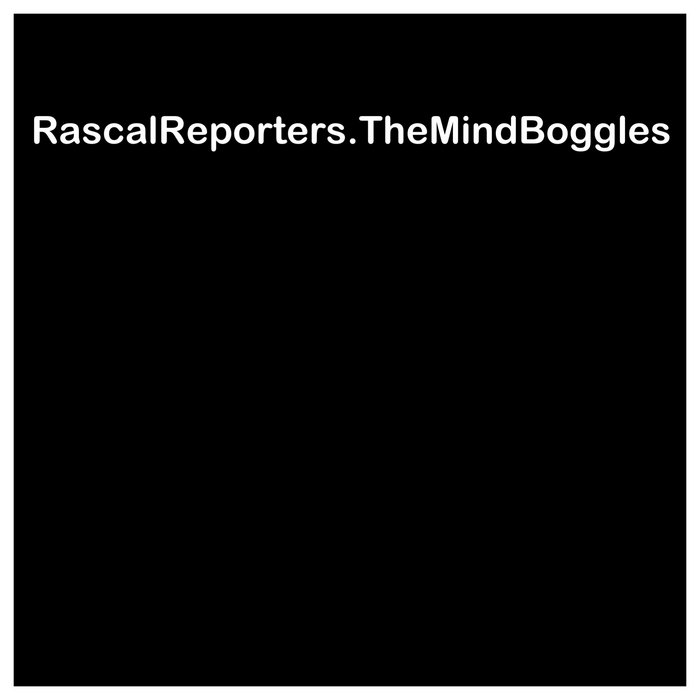 "Organ, drums, melodica, voice, acoustic guitar, computer: with these tools, the Rascal Reporters ruin perfectly good Pop melodies and sneeze in the face of Symphonic Jazz-Rock. Again. The band's seventh full-length work, The Mind Boggles hints at the jazz-tinged psychedelia of Soft Machine and the awkward quirkiness of The Residents. Since first performing live as the trio Pigling Bland in 1975, the Rascal Reporters have released five official compact discs, two vinyl LPs, three cassettes, one 7" single and a host of "unofficial" CD EPs. This dizzying discography is perfectly distilled on The Mind Boggles: a showcase for everything the group does well, and perhaps their most compelling work since 1988's masterpiece, Happy Accidents."
-Original 2008 Press Release

These tracks were gently remastered in 2014 (with a few typos corrected!), and are presented here in Steve Gore's preferred song order, a sequence that he perfected several months after the album was published worldwide. Sadly, this was to be the last Rascal Reporters album released during Steve Gore's lifetime. He died at his home near Detroit on March 14, 2009.

While preparing this reissue, some contemporaneous commentary from Steve Gore was rediscovered; let's allow him to give us all a glimpse into the making of The Mind Boggles:

"It's done! It came out great. I played it all the way through today. 12 songs, 65 minutes. There are a total of three very minor distortion points... I don't know how to get rid of these without ruining the songs. "Mr. Bellamy" from "Memory Almost Full" (Paul McCartney) has distortion during the brass section, so I don't care.

"Stewing In Rodentia" is a definite high point of the album. We've never done a song like this before... a 'breather/chill out' song after all the goofiness. I just wish there was more horn work on it!!!

I'm really, really proud of this one! I've heard it SO many times though, it's impossible for me to be objective about it. I kind of wish I could hear it for the first time. I still like 'Happy Accidents' better, but I think this is my second favorite one, just because there seems to be quite a bit of variety on it.

For the keyboard solos, I usually do a lot of fast runs up and down the keyboard for a half hour to get in "the mode." Soloing on the keyboard is much easier for me than playing arranged parts. I try to get into a "Zawinul" mode when I'm soloing. If I don't like the solo I recorded, I just do another re-take!!!

For the cover we want a full-colour photo of Kretzmer and I at the beach; he in a work suit, and me in a swim suit."
-Steve Gore, from private correspondence, 2008

Written and recorded 2004-2008 at Bass Mint Studios and Johnson Studios, Oak Park, Michigan. Engineered and mixed by Steve Gore. Recording tape was used for the production of this album.

"Help them to learn songs of joy instead of 'burn, baby, burn'" - Paul McCartney