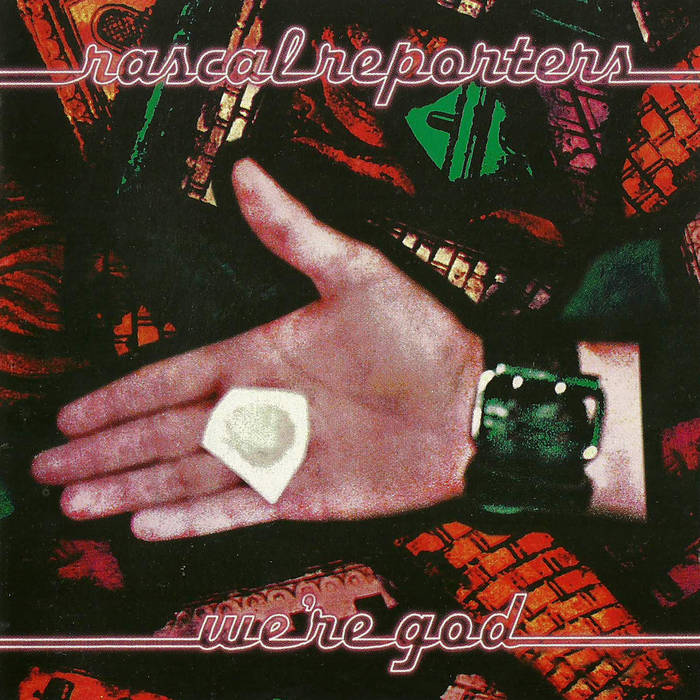 Rascal Reporters' 1980 sophomore cassette release 'We're God', digitally remastered in 2019 from the original master tapes - presented in higher clarity and fidelity than ever before!

In contrast to the 1997 CD issue of this album, where additional editing work was carried out, this version is presented as it was originally released in 1980, with the alterations being sonic rather than musical.

Hear Kretzmer's original piano-only version of 'Solomon Music', 'Cannonball Adderley' as it stood before its 1997 re-construction, Gore's scream of relief at the end of 'Fidget Stomp' as he completes a successful take, and all the fine intricacies of this piece of Reporters history!

Bonus tracks include the fully remastered 'Guns for Jerry's Kids / Beatrice' 7" single along with other selections from the era.

"This one really flashes me back to the good old days as The Rascals were one of the first bands ever offered by Eurock in the era of self-produced cassettes. This newly restored reissue of their classic 1980 debut recording once again reminds me of how great music can be when it’s done in the pure creative spirit. WE’RE GOD is a strange hybrid of Canterbury prog and RIO fusion filtered through the lens of Middle America. Messrs. Gore and Kretzmer not only could compose and play, but had a twisted sense of humor so the whole affair comes off a bit like a pre-K Frank Zappa. Fun to listen to and suprisingly STILL progressive musically today."

This edition of the album is remastered from the original 1980 master tapes. The album had previously been remixed and mastered by Steve Gore in 1997 for CD release on Wafer Face Records. The 1997 CD edition contained edits and re-arrangements of certain musical parts that are not present here on this new version of the album. The 1997 CD edition is still available digitally via CDBaby here for any interested fans: store.cdbaby.com/cd/rascal4

MF DOOM is given his flowers, plus appearances from MC Jada Imani and Stanley Ipkuss